What Causes Noises in Plumbing? 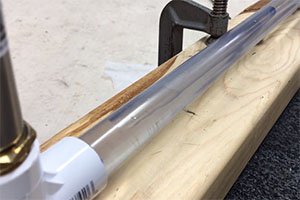 If you’re annoyed by banging and hammering noises in your plumbing, you have a problem you want to fix as soon as possible, if only to save your sanity. Should you call the plumber immediately or is there something you can do to stop the noises on your own?

There are two causes of noise in plumbing:

When you turn on a faucet or valve and air is trapped in a pocket or pockets somewhere in your pipes, the air is compressed. Turning on the valve releases the pressure and causes a loud hammering sound like the sound of the air pressure being released from an air gun.

Water hammer works a little differently. The reason why it occurs when you turn off the water is that the momentum of the water causes it to crash into the faucet valve, causing an initial hammering sound. Further down in the pipes, an air cavity and a vacuum is formed. This makes the water surge forward repeatedly until the air pressure gradually diminishes.

You may be able to stop air hammer from occurring by turning off the water at the mains, draining all the water from your pipes and then turning the water on again. This may work on water hammer, too, but if it doesn’t, the only other way to prevent it from happening is to slowly turn off your faucet to prevent the sudden onrush of water against the valve.

If you live in an older home, you have two choices. You can reduce your water pressure and see if that works or you can get quotes for installing a hammer arrestor into your pipes. This is probably the best solution because if left unchecked, water hammer can cause pipes to burst. As annoying as those banging sounds are, a broken pipe is a far bigger problem and more expensive to fix.

Our plumbers at Willetton Plumbing & Gas are trustworthy, reliable and very experienced with all types of plumbing. Call us now on 0423 854 687. Or, contact us from here.