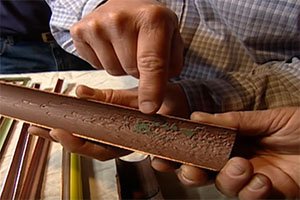 For a quick test of an old house, turn on the water. If the pressure is low, the house probably has galvanized pipes that have corroded and are seizing up. It is possible that only some of the bad pipes were replaced, leaving lots of old galvanized pipes still in the house and either in need or soon-to-be-in need of replacement.

Plumbers will advise you to replace the entire piping system when galvanized piping starts to go bad, but that is pricey, and often homeowners opt for the more economical, halfway fix by repairing only the pipe that is the immediate problem. In the past some of the bad galvanized pipe may have been replaced with more galvanized pipe instead of copper or plastic pipe, meaning the problem has just been extended, rather than cured. It’s difficult to determine the entire plumbing picture, since most of the system is underground or under the house, although some will be attached to the outside walls. If the house has a space underneath and you’re not too discomfited by going under it, you can get a better idea of the plumbing status.

Once you have determined the extent of the galvanised pipe you can make a considered and financial decision on replacing it. Plumbing isn’t confined to the house. It begins and ends at the street. On the supply side, all piping on the house side of the meter belongs to the homeowner, and everything on the street side belongs to the Water Corporation or the Local Authority. The meter should have a dial that shows water flow, so that if you turn off all the water inside the house, and the dial still moves, there is a leak in the system somewhere. 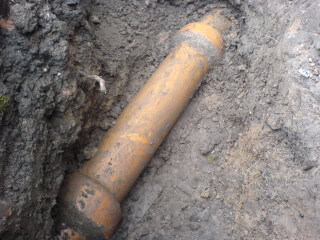 If the house is on a sewer, the homeowner owns the line from the house to the street, and that line can cause problems in old houses. The sewer line can be root-bound or cracked. It’ll probably cost around $250 to run a camera down the line to check its condition.” Sewer lines are normally clay or plastic.

Old clay is particularly susceptible to root intrusion. Plastic, which became common in the 1980s, is durable, but can be crushed. Of course, all types of pipe material can succumb to an impenetrable blockage from grease and fat, tennis balls or nappies. Old houses, like anything else getting on in years, can be notorious for age-related problems. When it comes to plumbing problems, you can suspect galvanized pipes and bad sewer lines are the source.

Our plumbers at Willetton Plumbing & Gas are trustworthy, reliable and very experienced with all types of plumbing. Call us now on 0423 854 687.